DigiWall – A case study at The Warehouse Climbing Centre 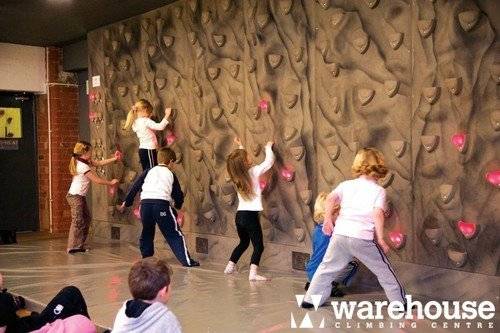 DigiWall is part computer game, part climbing wall attraction has been an important part of Innovative Leisure’s product range for over six years. Its unique design promotes educational and healthy activity and as new units continue to be installed round the country, the high energy adventure attraction specialists caught up with Simon Baldwin of Gloucester’s The Warehouse Climbing Centre, an operator of DigiWall for a number of years to see how the product has improved business.

IL: Simon, three years have passed since we installed DigiWall here at the Warehouse. What made you choose the product?


SB: We were looking for something unique, we hadn’t seen elsewhere, that we could use with groups of children. After looking at it for a while we thought there was also a market for older children and for team building.

IL: So what ages do you typically get using and enjoying DigiWall?

SB: A wide range of ages use DigiWall. We use it for birthday parties which are from 4/5 year olds up to 10 year olds. Also Scout and Youth groups use it regularly these are aged between 8 and 16. We have also used it with adult groups in team building sessions.

IL: Why do you feel DigiWall works so well in a large climbing centre with so many other climbing options?

SB: I guess because it is climbing but with an additional and different fun element. Sometimes it is hard to motivate children to climb, if they do not like the look of the height. DigiWall provides a good stepping stone and starts them climbing without thinking about it. Gradually they move on to bigger climbs, but they always come back to DigiWall because it is so much fun!

IL: What do you think is the main thing DigiWall adds to the overall offering at The Warehouse?

SB: DigiWall forms a key component of our birthday party packages. As I said before, it engages children in climbing if they have never done it before and helps them progress. It has also opened up a market to special needs groups, because the wall engages with them and they can interact with the wall it holds their attention. With the sound and the lights it is so much more than just a climbing wall.

IL: What do you attribute to DigiWall’s success at The Warehouse?

SB: DigiWall is a different experience. It fits in well here due to its climbing aspects but also because it is usually something people haven’t seen before. Once people have seen it and played one of its many games no one walks away not liking it. 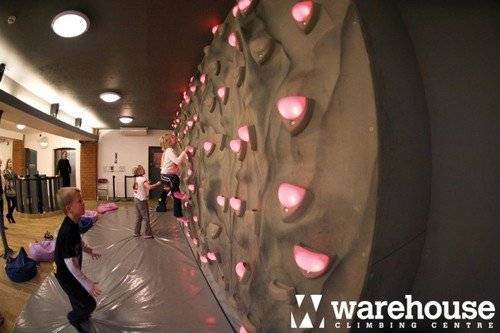 IL: What do you find is the most efficient way of operating DigiWall?

SB: At The Warehouse we only ever use DigiWall as part of an organised session. It is not something we let anybody go up and have a go by themselves. I don’t see it working in that environment because it costs too much not to be utilised to the fullest. If it is used by groups it is a valuable addition to their session.  When we have large groups such as schools, we set up bases and groups move around the centre taking part in different climbing related tasks and most say they enjoyed DigiWall the most. It is fun and energetic but not scary.

IL: Do you operate DigiWall with a defined price structure?

SB: At The Warehouse we only operate DigiWall as part of a package in either 30 or 45 minute slots. This is the way it works best for us. Occasionally we will use it as part of a room hire where groups come in regularly with youngster and we show their leaders how to operate the wall. This way we don’t need to supply instructors. This often works for those who bring “difficult” children and they use DigiWall as a reward for good behaviour. They can call us and hire the room for an hour and operate DigiWall themselves.

IL: How many staff work on DigiWall and how long does it take to train them?

SB: One of the reason we originally liked the DigiWall was that it only takes one person at a time to operate it and every member of our staff can easily be trained to do so. It only takes around ten minutes to train someone to operate but it isn’t the training that is important, it’s the personality of the person that matters. ‘Bubbly’ personalities motivate people and help them enjoy themselves.

IL: How does capacity work versus demand with DigiWall?

SB: We have a six panel DigiWall and we work with groups of twelve usually as part of a birthday party package. This works well because we can form two teams for some games. For example, the Egg Drop game, we put one team up (one person per panel) then when they have finished the other team can try and beat their score. With games where the wall is split down the middle, we can use one team per half in direct competition. On rare occasion, we have had groups of 30 on DigiWall, but it is harder to occupy the ones who aren’t playing with these numbers.

IL: What has DigiWall done for visitor numbers at The Warehouse?

SB: Before DigiWall we used to offer normal climbing birthday parties and would do six or seven each weekend day.  We now offer the main climbing party and what we now call the ‘Kids Zone’ party package which incorporates DigiWall and a room that has been set up with Auto-Belays, the same used on our Mobile Climbing Walls.  We then have one instructor and twelve children and we can have up to ten Kids Zone parties every Saturday and Sunday in addition to our traditional parties.  A slow weekend is now ten parties each weekend day, the busiest we have ever been has been nineteen parties in one day. So it is obvious having DigiWall has made a big impact.  We charge £103 for the Kids Zone party and an additional £42 for the twelve children to eat from our menu.

IL: What sort of response has The Warehouse had from guests to DigiWall?

SB: Response has been very good and many children that have been to DigiWall parties have subsequently had their own parties at The Warehouse. Our general manager has two children of his own and on one weekend he had one child come to two DigiWall parties and his other child coming to one. So his weekend off had ended with him coming to three parties at work. The response to DigiWall has always been positive and enthusiastic from visitors and we’re glad it is performing so well.

IL: Finally, how has DigiWall lived up to your expectations since it has been installed?

It is clear from Simon Baldwin’s comments that DigiWall has been a huge success for The Warehouse Climbing Centre in Gloucester. DigiWall’s success in locations such as Genoa’s Aquarium and the Kidz World family entertainment centre in St Austell, UK coupled with our latest installation at Manor House Wildlife Park in Pembrokeshire, UK goes some way to describing the diversity of the product. Innovative Leisure has a range of high energy interactive attractions which fit into many different sectors. DigiWall is just one such exciting product.

View the whole range at www.innovativeleisure.co.uk.